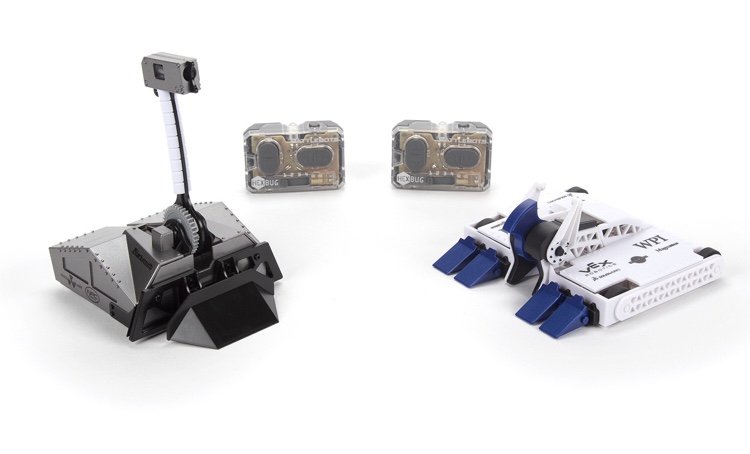 HEXBUG just announced the release of an all new line of their popular BattleBots. Featuring the latest designs from season three, “Bite Force” and “Blacksmith” are the two newest editions to this series of remote-control bots. 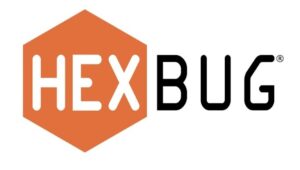 HEXBUG is a company that produces robotic toys and games.

Players can activate the motorized weapons and knock their opponent’s armor off to win the battle. Bite Force comes equipped with a drum spinner and Blacksmith features a massive forged hammer! These bots are known as being some of the hardest hitting from the show and HEXBUG is pleased to add them to the line. Players can also take their BattleBots experience to the next level with the Arena FX Module that includes sounds from the hit TV show, a countdown timer, and fifteen BattleBots sound effects.

BattleBots Champion from the popular TV show, Bite Force’s Paul Ventimiglia, enjoys the new line and granted a behind the scenes interview here to discuss it. 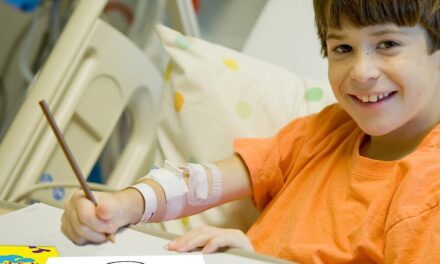 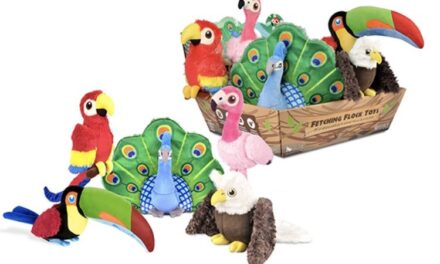 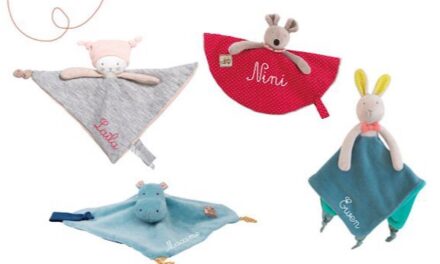 Moulin Roty: A French Brand Beloved in the USA 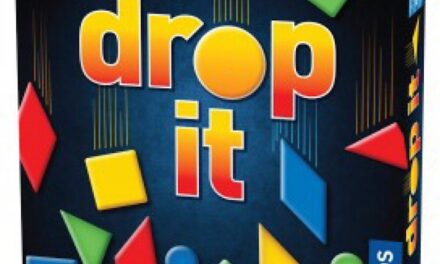 Check out our podcast!

Big Talk about Tiny Humans is India’s first science-backed, research-based podcast with insights on child development and psychology for discerning parents and educators. Devishobha, the founder of Kidskintha and Dr. Meghna, The Therapist Mommy have a lot of fun co-hosting this podcast in collaboration with IVM podcasts, the largest podcast network in India! Join us along this roller-coaster ride!

How Parenting Triggers Past Trauma?

I get triggered every time my child doesn’t listen to me. Why do I get SO triggered when I’m not heard? Is it because I’m overwhelmed with my parental responsibilities? Or does it go deeper than that? Do my triggers flow from the past- from a time when I wasn’t heard by my parents?

In the 24th episode, hosts Dr Meghna and Devishobha discuss how our childhood and how we were raised can continue to impact us and how we choose to parent our kids.

O=Imaging and practicing a different outcome

Big Talk About Tiny Humans is India’s first research-based podcast for parenting and educators, hosted by Devishobha Chandramouli and Dr Meghna. Visit https://ivm.today/tinyhumans to learn more about the show.

If you wish to learn more, check out:

Tune in to Big Talk About Tiny Humans every Wednesday for new episodes!

Have a question or topic you’d like to see covered on the show? Follow and DM the hosts on Instagram at @kidskintha and @thetherapistmommy and the hosts will address them in future episodes. Visit https://kidskintha.com/ and https://raisingfamilyacademy.com to learn more about the hosts’ ongoing programs on parenting and child development.

You can listen to this show and other awesome shows on the IVM Podcasts app on Android or iOS. Subscribe to the show on your favourite podcast platform to never miss an episode! You can check out the IVM website at https://shows.ivmpodcasts.com/.

You can also listen and subscribe to the podcast on all podcast platforms. If you’re on Apple Podcasts or Spotify, don’t forget to leave the show a rating and a review. You can also find the show on Google Podcasts, Amazon Music Podcasts, JioSaavn, Castbox or elsewhere. 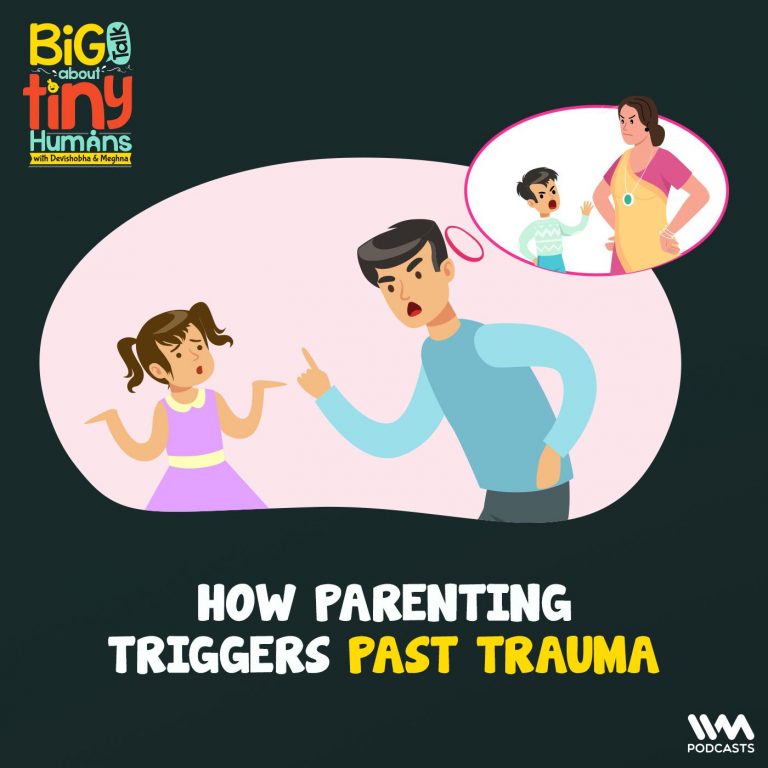 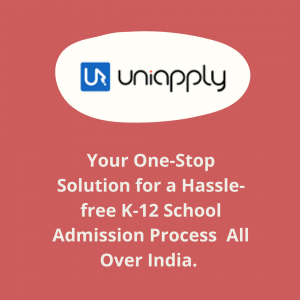 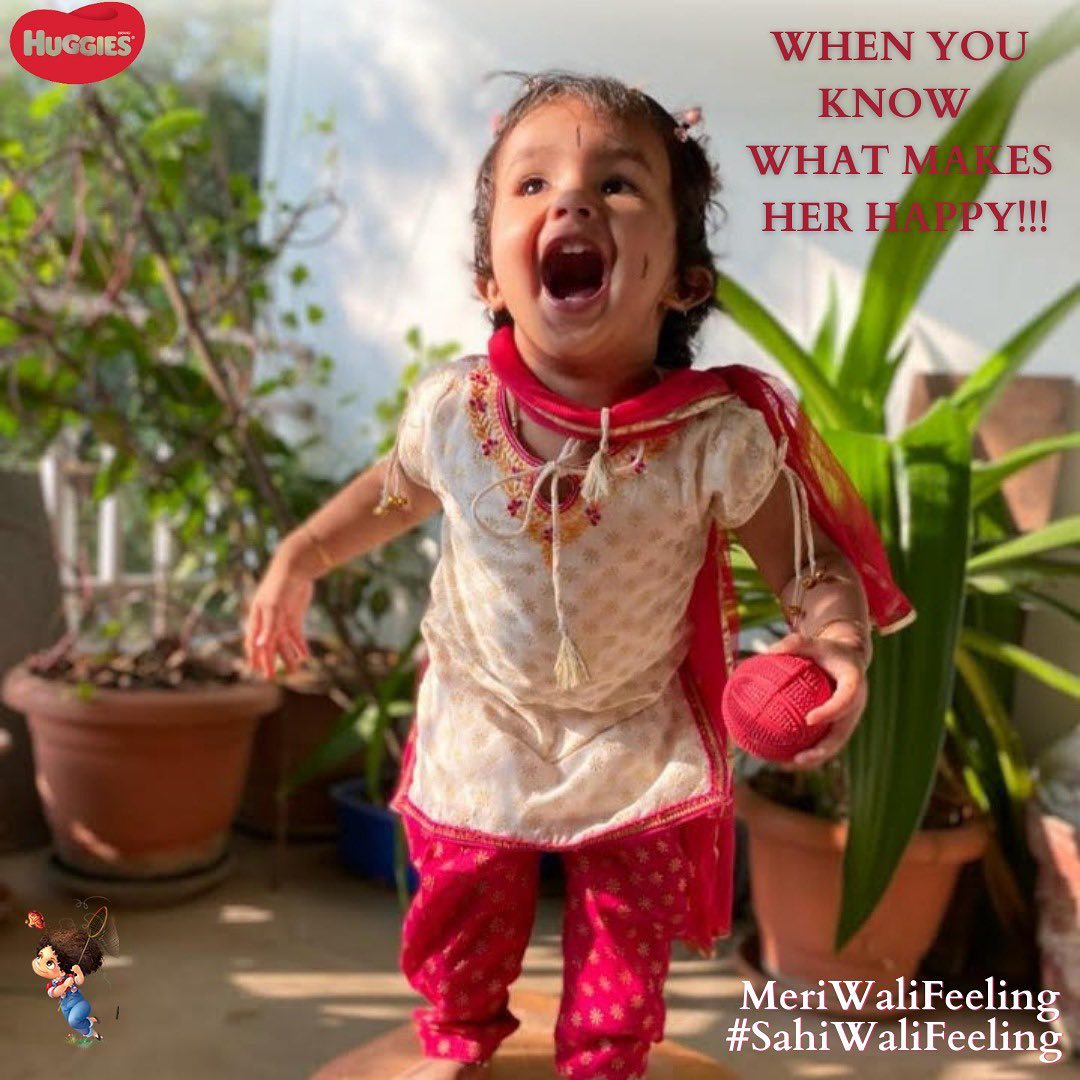 kidskintha
•
Follow
I still remember the terrifying moment during my daughter’s toddler days when I had come out of the house instinctively to check on her only to have my heart skip several beats! I found her dangerously close to falling from a wall! I profusely thanked my motherly intuition for that savior moment! The undeniable #SahiWaliFeeling- or not - that every mom has for their child. We’ve known for a long time that motherhood changes us—duh, right?—but scientists are just starting to characterize the precise nature of those bodily and psychological changes. Scientists have known for a couple of decades that women’s brains shrink during pregnancy. The running hypothesis is that ‘brain shrinking’ might actually be a sign of the brain honing its circuits for mothering. We might often say and mean it in a funny vein but the ‘mommy brain’ is a result of pregnancy. Women’s brains are permanently altered after childbirth. While science has confirmed the permanent changes in women’s brains, there’s an ongoing conversation on the ‘motherhood instinct.’ Experts agree that moms can be more sensitive or susceptible to particular cues, and this kicks off almost immediately after childbirth. Thanks to Huggies #SahiWaliFeeling campaign that is instilling confidence in a lot of moms to trust their instincts. Stop judging yourself. Go with the flow. ✨📷: @therealananyaramanan #huggies #motherhood #motherlove #newborn #ad #paidpartnership
View on Instagram |
1/8 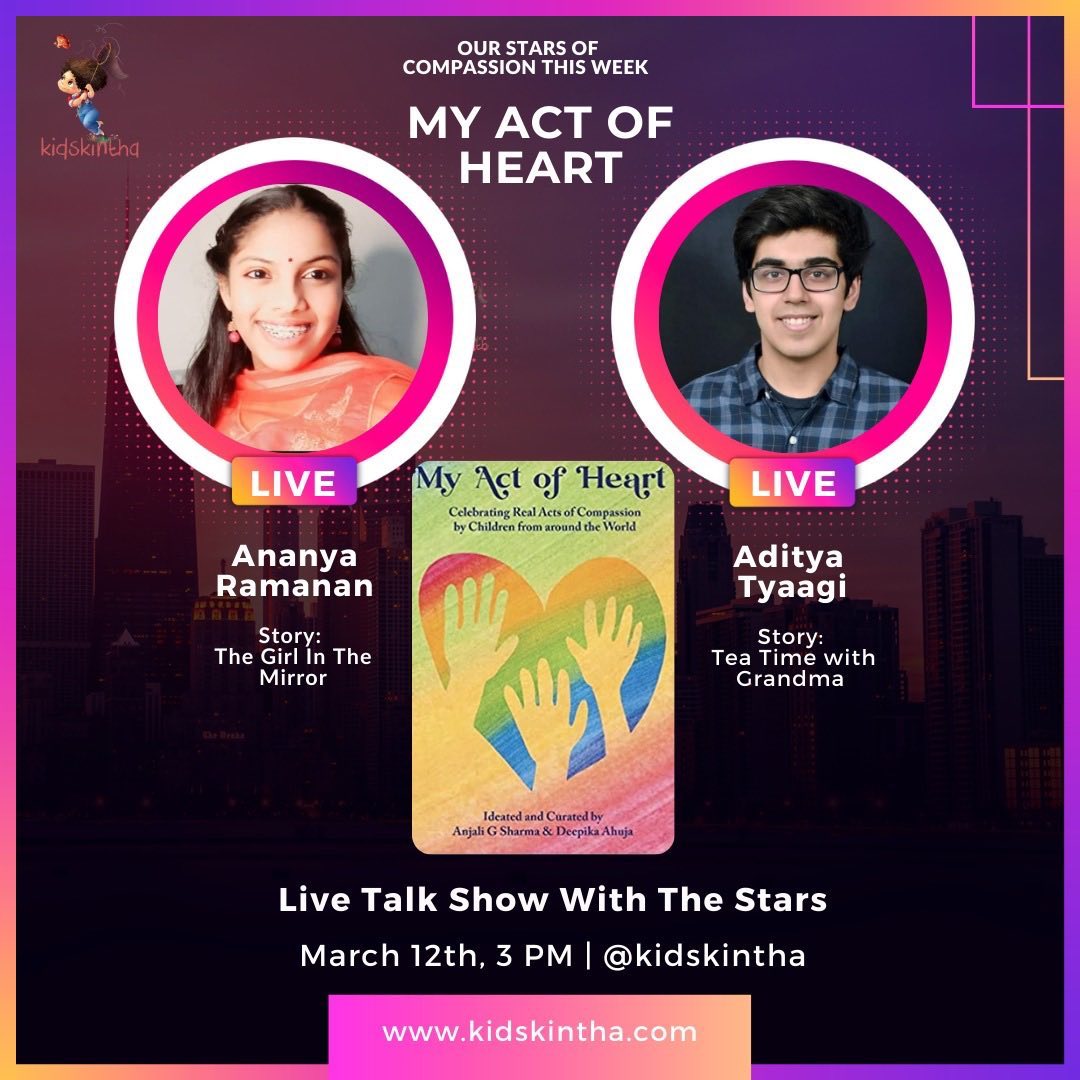 kidskintha
•
Follow
Join us for a LIVE session with the authors of the anthology ‘ My Act of Heart’ - a collection of real acts of compassion by children from all over the world! Thanks to @Anjali Gurmukhani Sharma and Deepika Ahuja for taking this idea from seed all the way to fruition! Today’s stars are Ananya Ramanan and Aditya Tyagi sharing their stories about what led to the act of compassion and how it has informed them further. Join us at 3 PM today! #selflove #gratitude #selfkindness #compassion #childrensliterature
View on Instagram |
2/8 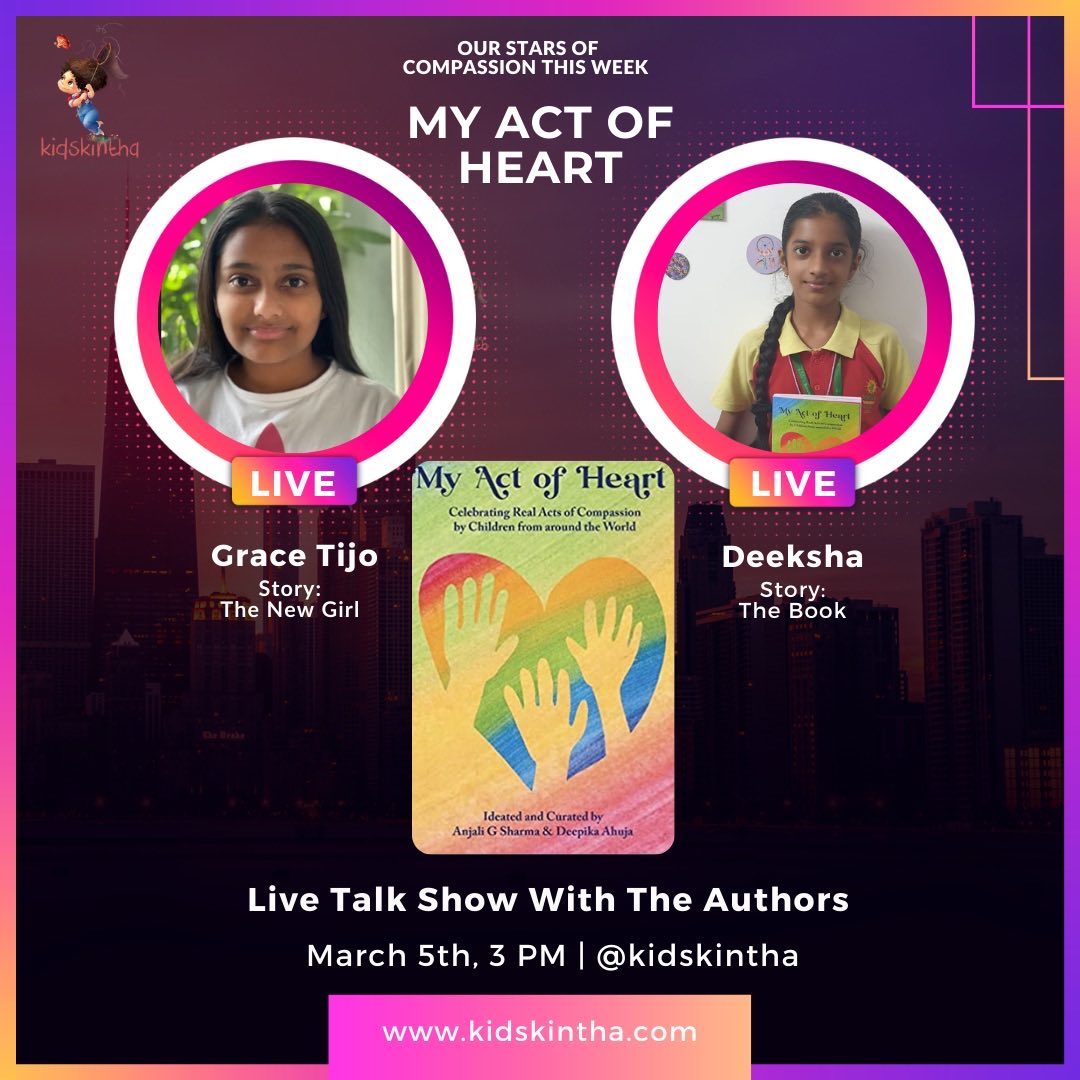 kidskintha
•
Follow
‘The Act of Heart’- the book is as special as the title is beautiful. When the world is reeling under uncertainty, one constant element that has kept hope alive is little acts of compassion from people known and unknown- and these children- all 29 of them, are totally owning it, combining passion with compassion. This book is a labor of love by Anjali Gurmukhani Sharma @anj_g_sharma of Charters of Compassion and Deepika Ahuja @deepika_forever1 who planted the seed of an idea to share real stories of acts of compassion by children, and has been almost 2 years in the making. This book is not only inspiring to other children and adults alike, but it also shines a light on the minds of children from the age of 6-15 from all over the world, and the book complements the storytelling with rich illustrations- again in part by children. Tomorrow, we are bringing two such stories to limelight through our live talk with Grace Tijo @grace_tijo6 and Deeksha @ajmerkidivya. Tune in to hear the heartwarming stories of these children who are already making the world a better place. Join us!!! #booksforchildren #youngreaders #raiseareader #raisingreaders #kidsbookstagram #middlegrade #kidsbookswelove #childrensbookstagram #booksforkids #childrensliterature #childrensauthor #kidsbookshelf #childrensbookauthor #representationmatters #storytelling #readersofinstagram #loveoneanother #truththeory #loveheals #raisingvibrations #forgiving #gratitude #selflessness #humility #compassionate #kindness
View on Instagram |
3/8 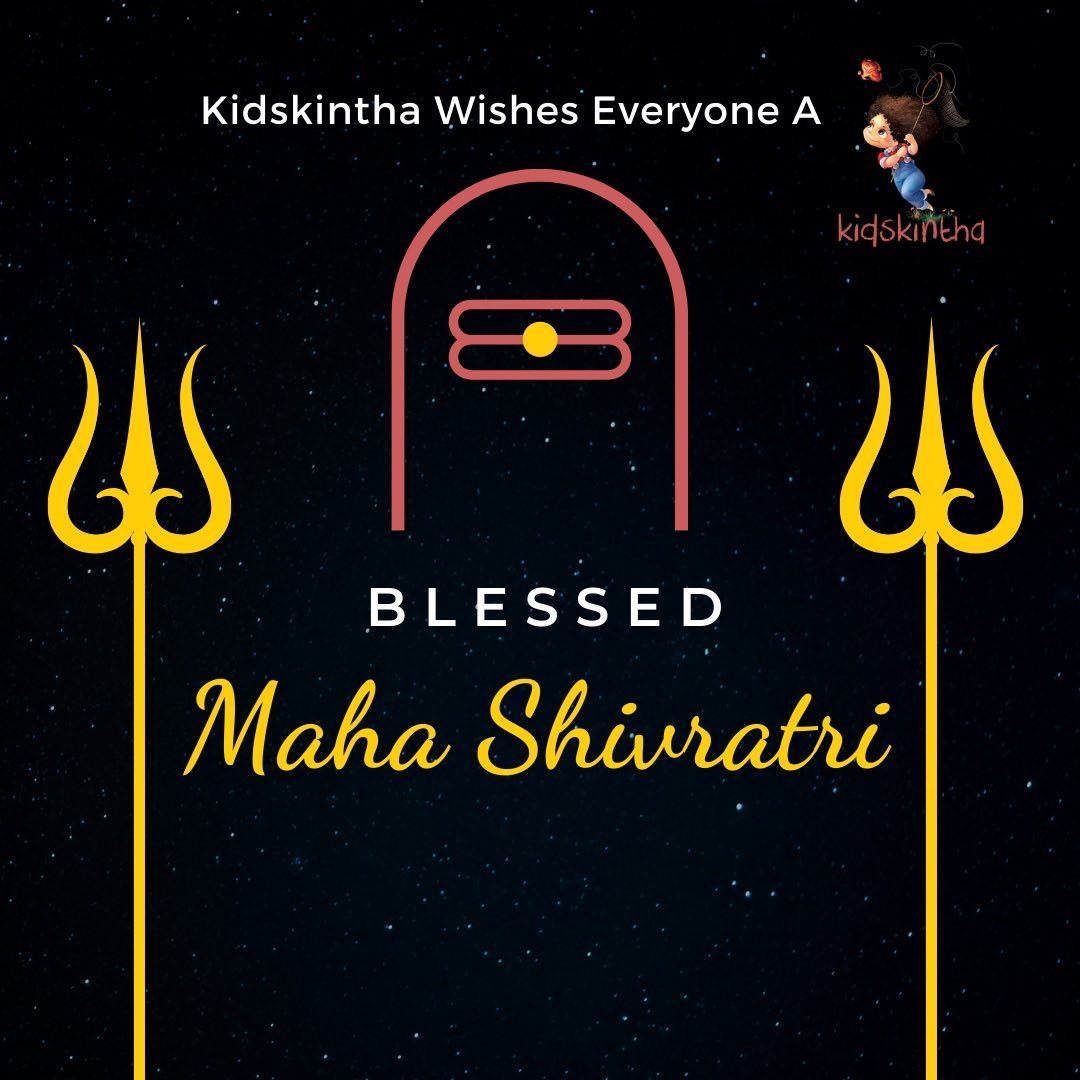 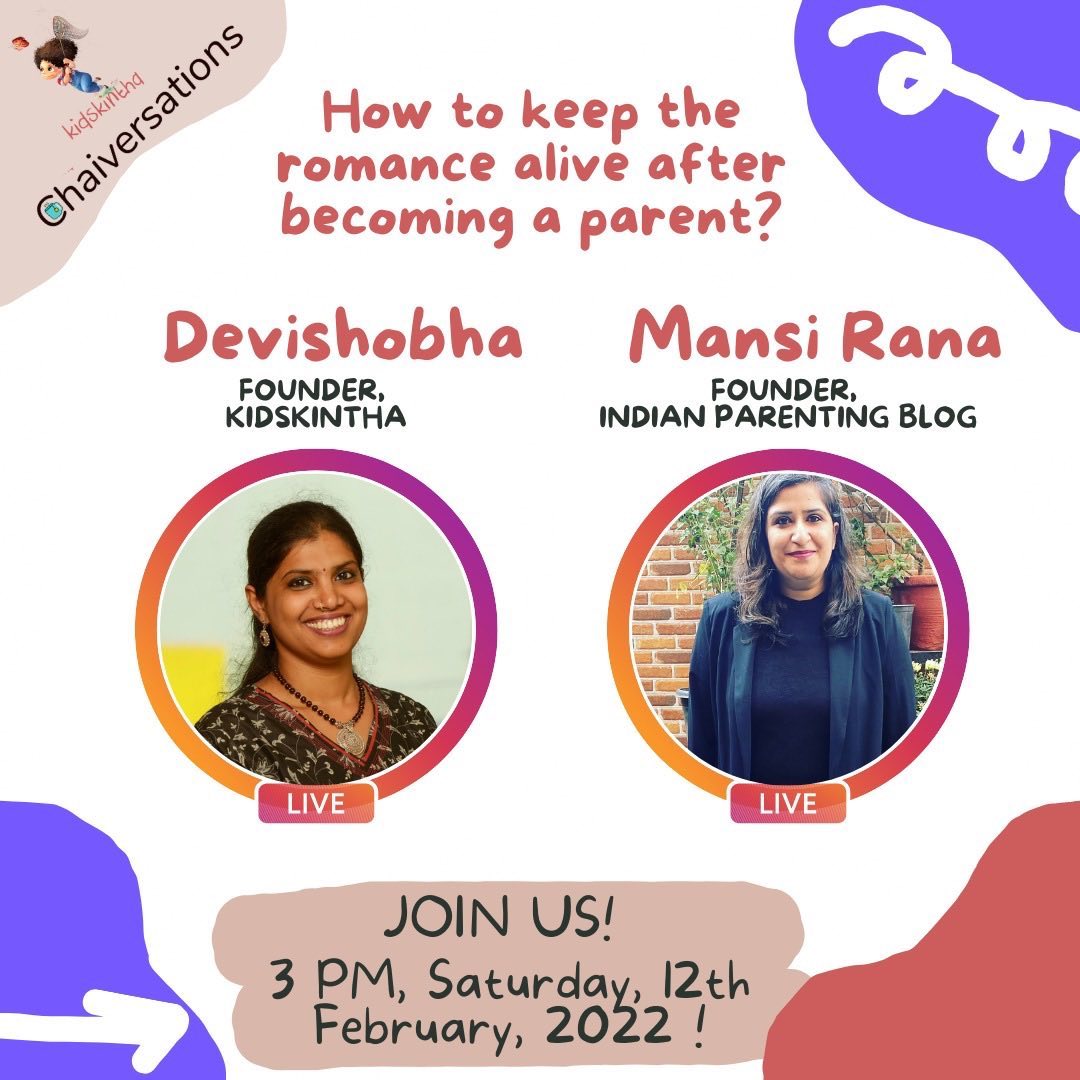 kidskintha
•
Follow
It’s time for another Chaiversation! Join us as Mansi Rana of @IndianParentingBlog and I share laughs and ideas to achieve some kickass #couplegoals especially after coming to terms with with the fact that a tiny human will be in tow and keep you on your toes all the time! #valentine #valentineday #valentinegift #valentinesdaygift #love #romance #valentineweek
View on Instagram |
5/8

kidskintha
•
Follow
Jody Landers said it just right with “A child born to another woman calls me Mom. The depth of the tragedy and the magnitude of the privilege are not lost on me.”🌸 Challenges of adopting an older child😇 Read on: https://kidskintha.com/adopting-older-children-unique-challenges-and-coping-strategies/ . . #adoption #adoptingteens #newparenting #parentingtips #parentinglife #parentingblog #momblogger #momandkid #momspiration #kidskintha
View on Instagram |
6/8

kidskintha
•
Follow
Teaching children positive money habits from an early age helps them to make responsible financial decisions later in life. The best time to learn about the value of money occurs when children remain safely under their parents’ wings — not when they’re adults and money mistakes cost far more👏 Read on : Link in the bio! . . #moneyhabits #children #moneymanagement #momblogger #parentingblog #parentingtips #parentingcoach #kidskintha
View on Instagram |
8/8
View on Instagram